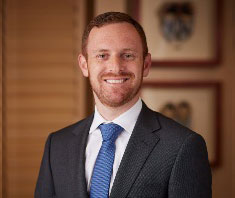 Ian was born in the Bay Area and grew up in Danville, California. He attended San Diego State University for his undergraduate studies prior getting his J.D. from McGeorge School of Law. Prior to coming to Schuering Zimmerman & Doyle, LLP, Ian spent two years with a boutique plaintiff’s firm focusing on elder abuse and medical malpractice. Ian’s current practice focuses on medical malpractice defense, elder abuse defense, professional licensing defense and select plaintiff’s personal injury and employment cases. Ian has tried and co-tried civil and administrative cases to verdict. He is the President-Elect of the California Academy of Attorneys for Health Care Professionals. When he is not working, Ian can be found surfing, golfing, cycling, and spending time with his friends and family.